WASHINGTON, D.C. (Texas Insider Report) — Heading into the 2022 Mid-Term Election Year, voters ​​​lack confidence in President Biden's leadership abilities, they are concerned about Inflation, the economy and the Democrat Party's "agenda," and are pessimistic or running short on confidence for all of the above according to new Wall Street Journal Poll.

And, more voters say they would back a Republican than a Democrat for Congress, 44% to 41%, if the election were held today.

The poll reveals a stark set of danger points for the Democrat Party as it begins to prepare its narrow majorities in both the House and Senate – confirming the already widespread discussion about significant party losses in the House of Representatives. 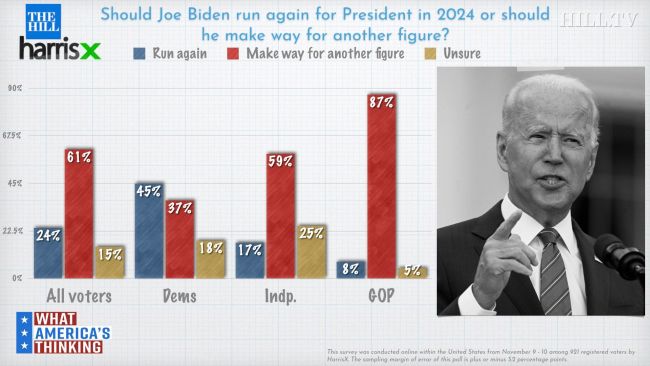 Most concerning for Democrats though is that:
The survey adds new evidence to the mounting impression that Democrats face steep challenges in holding onto their slim majority in the House, where a net gain of five seats would flip control to the GOP – as well as in the evenly divided Senate where Democrats have control only due to Vice President Kamala Harris's ability to break tie votes in the 50-to-50 division.

For instance, voters by a large margin see Economic & Budget Issues, including inflation, as the top priorities for Washington – and they view the GOP as better able to handle them.


And the public's view of the future, the polls reveals, are pessimistic:

The biggest challenge for Mr. Biden and Democrats appears to be that voters don’t see them well-equipped to improve the economy. Voters  believe Republicans have the better economic policy, 43% to 34%, and the GOP is viewed as better able to control inflation, secure the border, the immigration system and reduce crime as well.

Democrats were narrowly favored in the poll as the party best able to look out for middle-class families. Democrats are also seen as better able to get the pandemic under control, by 41% to 25%. (The Nov. 16th-22nd survey was taken before the Omicron variant of Covid-19 was reported in the news media.)

The survey did suggest that Democrats have an opportunity to win over some undecided voters by highlighting the party’s still-unpassed legislation, known as "Build Back Better," addressing some areas of "climate change," or by boosting social programs.

Among voters undecided on their 2022 choice, just 36% said they support Biden's "Build Back Better" plan, while an equal 36% oppose it.

Nearly a year after Mr. Biden won the presidency by less than 4.5%:
Adding a final piece of negative news for Democrats – more House Democrats (including some long-serving House Committee chairmen,) than Republicans have chosen not to seek re-election, giving an added overall advantage to Republicans.

The survey is the first in a new Wall Street Journal Poll effort that will explore the driving forces in American politics, in which the Journal is drawing on a new bipartisan polling team that includes the firms of Republican Tony Fabrizio, the lead pollster for former President Donald Trump’s two campaigns, and Democrat John Anzalone, the lead pollster for Mr. Biden’s 2020 presidential campaign.

The Wall Street Journal poll was conducted by the firms ALG Research and Fabrizio, Lee & Associates, who surveyed 1,500 respondents that were drawn from a list of known Registered Voters from Nov. 16-22. Of those surveyed, 50% were interviewed on their cellphones. 25% were reached on their cellphones via text and completed an internet survey, and 25% were interviewed over a landline phone. The margin of error for the full sample was plus or minus 2.5%.