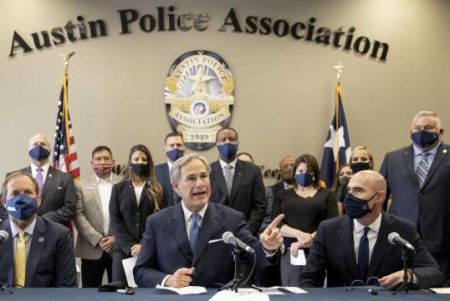 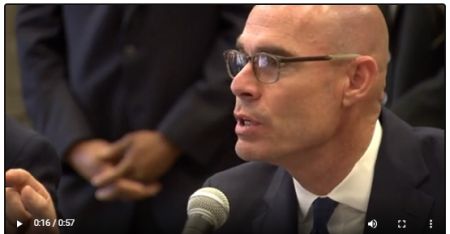 "They're hypocrites, plain and simple," said Bonnen.
Abbott's #TexasBacksTheBlue Pledge is the governor's latest effort to highlight the action's of various cities across the state to "Defund the Police" in Texas in order to address "Social Injustice," often transferring the funds to other social services programs.

Austin City Council cut $150 million from the city's Police Department last month, canceling three the next three Police Cadet classes and shifting police funds toward other city departments that address mental health, addiction, and lesser violent crimes previously responded to by police.
"They're sitting around and using Law Enforcement as apolitical tool when it serves them best. When it serves them to hide from Property Tax Reform and transparency to the voter, they use Law Enforcement.

"When it serves them to serve the Socialist Agenda that they want to play to, they use Law Enforcement.

"Defunding law enforcement to prop up and advance socialist policies is demeaning, dangerous and incredibly disrespectful.

"I am proud to sign the 'Back the Blue' pledge," said Bonnen.

A recent poll by the University of Texas-Tyler and The Dallas Morning News found:
When asked if some money should be cut from police budgets to increase spending on social services, only 14% of Republicans agreed, compared to 64% of Democrats.

“I sign this Texas Backs the Blue Pledge to oppose any efforts to defund the police and to show my support for the brave law enforcement officers who risk their lives to protect and serve. Defunding our police departments would invite crime into our communities and put people in danger. That is why I pledge to support any measure that discourages or stops efforts to defund police departments in Texas. Our law enforcement officers have our backs every single day, and we need to show them that Texans have their backs. #TexasBacksTheBlue”
Gov. Greg Abbott, Attorney General Ken Paxton & Texas House Speaker Dennis Bonnen hold a 'Back the Blue' Press Conf. on Thursday, Sept. 10, 2020 by N/A is licensed under N/A