Democrat Bloomberg of His Fellow Presidential Candidates says: Trump Would Eat Them Up 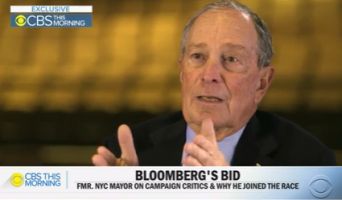 Let me rephrase it. I think that Id do the best job of competing with him.

Quickly realizing the gravity of what hed just said and after being questioned about it by host and well-known Oprah Winfrey BFF Gayle King Bloomberg back-tracked immediately on the statement saying he believed he was the best candidate to take on Trump in the 2020 General Election:

Let me rephrase it.

I think that Id do the best job of competing with him and beating him Bloomberg said.

Continued Bloomberg the billionaire former New York City Mayor who has has for years been one of the nations biggest gun control backers:

I watched and I said we just cant have another four years of this.

I looked at our national government getting worse. I said back in 2016 he is the wrong person for the job.

Bloomberg announced his presidential bid just weeks ago and has already spent more than $35 million on his campaign which has included a major television advertising campaign with the strategy of ignoring the early primary states and focusing on the March 3rd Super Tuesday states.

The former New York City mayors entrance into the race has drawn scrutiny from his opponents in large part due to his status as a billionaire.

Sen. Cory Booker (D-NJ) expressed anger this week after Sen. Kamala Harriss (D-CA) was forced to drop out of the race earlier in the week noting

Theres more billionaires in the 2020 race than there are black people.

Hes very well-spoken. Hes got some good ideas. It would be better the more diverse any group is but the public is out there picking and choosing and narrowing down this field Bloomberg said.