Black Lives Matter Founder: ​​​​​​​“Our Goal is to Get Trump Out. We're trained Marxists, super versed on... Ideological Theories.” 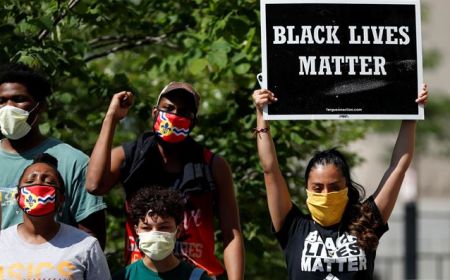 Black Lives Matter protesters rally June 1, 2020, in St. Louis, MO. against the death of George Floyd in Minneapolis, MN by N/A is licensed under N/A
“We actually do have an ideological frame." We "are trained organizers. We're trained Marxists.”

WASHINGTON, D.C. (Texas Insider Report) — Black Lives Matter founder Patrisse Cullors confirmed last weekend that one of the radical group’s “goals” is to remove President Donald Trump from office, and stressed that voting him out in November is not good enough – she said Mr. Trump "should resign now."

Cullors has compared President Trump to Adolf Hitler on multiple occasions In the past.

And, in recently resurfaced video from 2015, Cullors removed all doubt that the Black Lives Matter's movement are “trained Marxists,” making clear the organization’s expressed ideological foundation. 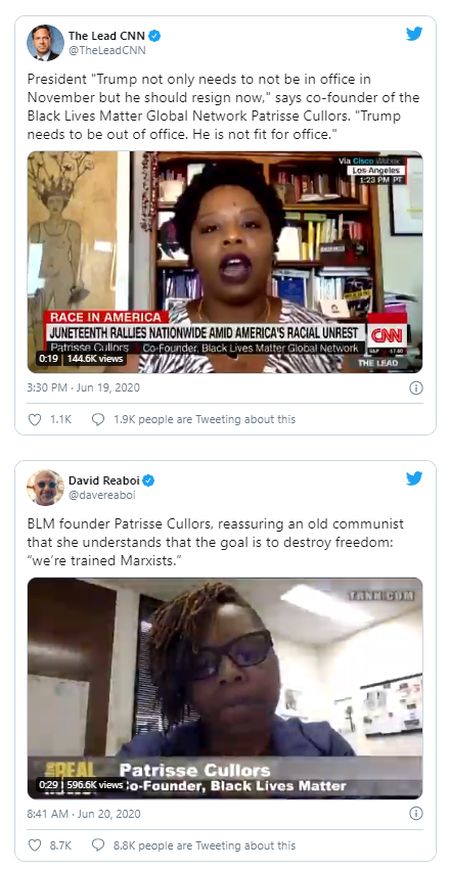 “Well, I’m hands down – Trump not only needs to not be in office in November, but he should resign now,” Cullors told CNN's Jake Tapper Friday evening.

“Trump needs to be out of office. He is not fit for office. So what we are going to push for is a move to get Trump out.

“We’re also going to continue to push and pressure Joe Biden around his policies and relationship to policing and criminalization, that’s going to be important,” the BLM founder said.

“But our goal is to get Trump out.”

Black Lives Matter website doesn't specifically mention or acknowlege that they are Marxists, but Cullors admitted during a 2015 interview that they subscribe to Karl Marx's ideology.

In the resurfaced 2015 interview, Cullors was asked about a supposed “lack of ideological direction in Black Lives Matter.”

“We actually do have an ideological frame,” repsonded Cullors. “Myself and Alicia, in particular, are trained organizers.”

In the “What We Believe” section of the official BLM site, the organization calls for the “national defunding of police” and for the “disruption” of the nuclear family.

“We call for an end to the systemic racism that allows this culture of corruption... We call for a national defunding of police. We demand investment in our communities and the resources to ensure Black people not only survive, but thrive,” the site reads.

“We disrupt the Western-prescribed nuclear family structure requirement by supporting each other as extended families and ‘villages’ that collectively care for one another, especially our children, to the degree that mothers, parents, and children are comfortable,” the section continues.

“We foster a queer‐affirming network,” Black Lives Matter says. “When we gather, we do so with the intention of freeing ourselves from the tight grip of heteronormative thinking, or rather, the belief that all in the world are heterosexual (unless s/he or they disclose otherwise).”

"We affirm the lives of Black queer and trans folks, disabled folks, undocumented folks, folks with records, women, and all Black lives along the gender spectrum," the website reads.

"We make space for transgender brothers and sisters to participate and lead. We are self-reflexive and do the work required to dismantle cisgender privilege and uplift Black trans folk, especially Black trans women who continue to be disproportionately impacted by trans-antagonistic violence." 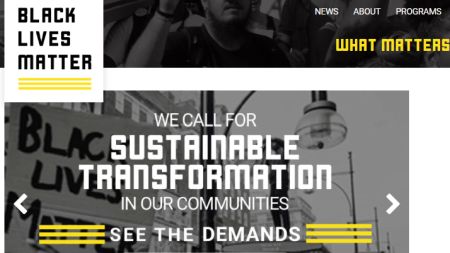 Today, the group goes further and also focuses on a myriad of leftist causes. Their website states the group focuses on:

"We engage comrades with the intent to learn about and connect with their contexts," says the Black Lives Matter website, following in the footsteps of various 1960s-era African-American radical revolutionary groups that were influenced by Marxism, including Weather Underground and the Black Panther Party.

On Friday, Cullors said, "Our goal is to get Trump out" on CNN's "The Lead", hosted by former Capitol Hill Democrat staffer Jake Tapper. In 2017, Cullors told MSNBC’s Katy Tur that she believed that so-called “hate speech” was not protected by the U.S. Constitution.

“Hate speech, which is what we’re seeing coming out of white nationalists groups, is not protected under the First Amendment rights,” Cullors said.
Black Lives Matter protesters rally June 1, 2020, in St. Louis, MO. against the death of George Floyd in Minneapolis, MN by N/A is licensed under N/A