As Voters Move En Masse to Vote Republican, Top Democrats Argue Over Questions & Their Own Strategies 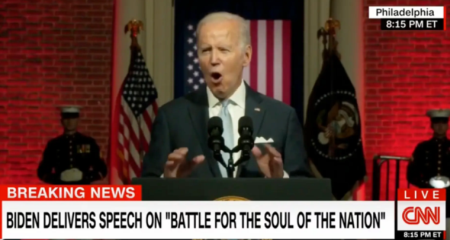 President Joe Biden gave a National Address on "The Soul of the Nation" on Thursday, Sept. 1st, 2022 from Independence Hall in Philadelphia, PA. by N/A is licensed under N/A
Democrats tried to frame Election not as a referendum on an unpopular Joe Biden, but as a choice between two very different visions for America – and its failing miserably

WASHINGTON, D.C. (Texas Insider Report) — In the final Home Stretch of the 2022 Mid-Term Elections, top Democrats – including Joe Biden, Hillary Clinton & Barack Obama – are trying to emphasize Democrat's economic concerns while accusing Republicans of wanting to gut the social safety net. At the same time, they are issuing stark warnings about the threats some Republicans allegedly pose to "Our Democracy," with what they constantly refer to as "election deniers" on the ballot in critical races around the country. 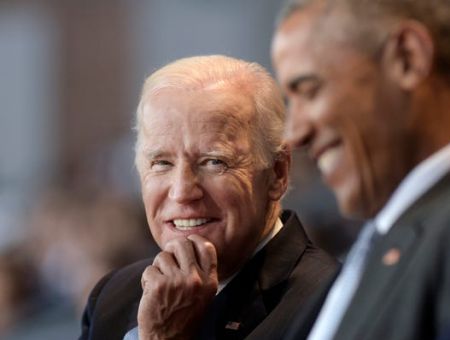 Yet as the country struggles with already high and escalating gas and grocery prices, as well as with record inflation and economic uncertainty, some Democrats have now begun to openly acknowledge that their late-to-the-game "kitchen-sink" approach may be lacking. Several prominent Democrats even worry their party has not fully acknowledged the pain rising prices are causing their own constituents.

The criticisms by Democrats in the final days of the mid-term elections signal mounting anxiety as Republicans hammer away with attacks over the economy and public safety. For weeks and months, Democrats have offered a scattershot case of their own – accusing their opponents of wanting to gut abortion rights, shred the social safety net, and shake the foundations of "American democracy."

READ MORE:  Another Poll Confirms – 90% of Voters Are Worried About Inflation & Their Economic Future
For weeks, much of the intra-party critique has centered upon whether Democrats made a mistake by leaning too heavily on the Supreme Court’s decision to send Roe v. Wade and the issue of abortion back to individual State Legislatures for deliberation.

And since the June decision in Dobbs v. Jackson Women’s Health Organization, Democrats had hoped they would overcome the nation's economic anxieties – which American voters clearly now blame on the Biden White House and Democra's control of Congress – with the promise of preserving abortion rights and castigating Republican extremism.

“I definitely think we weren’t wrong by focusing on Dobbs when it happened, because it was so earth-shattering,” said Democrat strategist Chuck Rocha, who focuses on Latino voters.

“The question should have been – Could we have done that and packaged together economic populism along with the Dobbs decision?

"I think we're closing with the best we can do.”

Leading Democrats lawmakers are also openly doubting whether the party pivoted too late to their supposed kitchen-sink approach, saying they have failed to unite around one central message.

Many point to an inadequate economic message – and an inability to effectively herald their legislative "accomplishments."

“The truth is, Democrats have done a poor job of communicating our approach to the economy,” said Congresswoman Elissa Slotkin, a Democrat from Michigan, who is competing in one of this year’s most competitive races.

“I have no idea if I’m going to win my election – it’s going to be a nail biter – but if you can’t speak directly to people’s pocketbook, and talk about our vision for the economy, you’re just having half a conversation.”

Ms. Slotkin is far from alone in her criticism.

And former President Barack Obama – who is now traveling the country in a last minute effort to energize the lagging Democrat base in some of the tightest Senate, U.S. House and Governor's races – urged Democrats not to be “a buzz kill” by making people feel as if they were “walking on eggshells” when it came to issues like race and gender.
As president, Mr. Obama saw his party suffer a historical mid-term loss of 63 seats during his first mid-term election – which came after pushing his controversial "ObamaCare" legislation with the false promises of being able to "Keep your Doctor if you like them," and "Keep your Insurance Company if you like them."

But this year, Obama is regarded by many Democrats as their most powerful surrogate. The problem, some say, is that there is only one of him.

Congressman Ro Khanna, a California Democrat, says that Joe Biden understands the urgency of the gas pump, grocery store and escalating crime issues, but questions whether the Democrat “consultant class” really grasped the potency of them and produced sufficient commercials or "marketing" efforts to re-direct Republican's successful campaign efforts to point out what Democrats have done to the nation's economy.
Amid President Biden's closing arguments – voiced in an ominous and questionable speech just days ahead of the election about protecting "our democracy," as well as an intense focus on abortion – Mr. Khanna said both of those are important, but prioritizing them should not come at the expense of top-of-mind pocket-book issues.

“Consultants, they looked at it, said, ‘Well, we’re down on the economy, well, maybe we shouldn’t talk about it. That’s a mistake! No, we need to press our case,’” he said.

Democrats have spent nearly $320 million on ads focused on "abortion rights," more than 10 times as much as the $31 million they have spent on spots about "inflation," according to data from Ad-Impact, a media tracking firm. 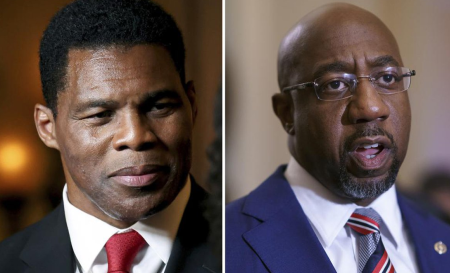 They have spent nearly $140 million on "crime" ads.

“We have not done as good a job as we could, or we should, communicating with the American people,” Khanna said last week outside a campaign event in Atlanta for Senator Raphael Warnock (at far right, with Republican Senate Candidate Herschal Walker, his opponent,) of Georgia.

“I know that from my barbershop discussions.”

That concern was echoed by others, who worry that Black voters haven’t been sufficiently motivated to vote.
President Joe Biden gave a National Address on "The Soul of the Nation" on Thursday, Sept. 1st, 2022 from Independence Hall in Philadelphia, PA. by N/A is licensed under N/A