WASHINGTON, D.C. (Texas Insider Report) — “Recent reports indicate that the Biden Administration, as part of negotiations with a left-wing activist group, is considering paying $450,000 per person to aliens who entered the United States illegally with their children,” said Republican lawmakers in a letter to President Joe Biden, referring to the American Civil Liberties Union and demanding answers on the now-reported potential massive payments to be made to illegal immigrants. “Each family of illegal aliens could reportedly receive nearly $1 million, for a total potential payout of $1 billion or more from U.S. taxpayers.”

The letter is directed to Attorney General Merrick Garland and signed by 19 Republicans.

“If accurate, these reports show how the Biden administration is once again putting the interests of illegal aliens above the interests of U.S. citizens and continuing to incentivize illegal immigration into the United States,” the letter noted.

Reporters asked Biden Wednesday to address reports that his administration was considering payments of about $450,000 per person to illegal immigrant parents and children who had been separated.
“That’s not gonna happen,” the president answered.
But on Thursday, White House Deputy Press Secretary Karine Jean-Pierre said that though the $450,000 figure is higher than what will be offered, the president is still “perfectly comfortable” with the Justice Department settling with families separated at the border.

“If it saves taxpayer dollars and puts the disastrous history of the previous administration’s use of zero tolerance and family separation behind us, the president is perfectly comfortable with the Department of Justice settling with the individuals and families who are currently in litigation with the United States government,” Jean-Pierre said.

Biden “may not have been fully briefed about the actions of his very own Justice Department.”

The DOJ “carefully deliberated and considered the crimes committed against 1,000s of families separated from their children as an intentional governmental policy, the ACLU said.
“We respectfully remind President Biden that he called these actions ‘criminal’ in a debate with then-President Trump, and campaigned on remedying and rectifying the lawlessness of the Trump administration,” ACLU Executive Director Anthony D. Romero said in a statement.

“We call on President Biden to right the wrongs of this national tragedy.”

The House Judiciary Committee letter maintains that the Biden Administration has already “rewarded” illegal aliens for violating United States law by allowing them to stay and work in the U.S. legally.

“Now the administration plans to reward these illegal aliens again with hundreds of thousands of U.S. taxpayer dollars,” the letter said.

“Notably, at least one [Department of Homeland Security] lawyer expressed concern that the administration’s proposed $450,000 payments could be higher than payments made to some of the families of Sept. 11 victims. 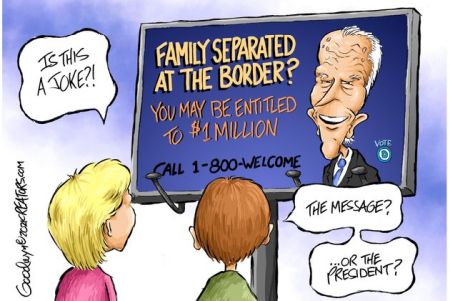 “Out of what fund(s) will the payments to aliens be paid?” the letter asks.

The Republicans warned Garland in the letter that the Biden Administration’s actions are sending “exactly the wrong message” on illegal immigration, demanding that Garland provide documents and communications on payments to illegal aliens found on the southern border in 2017 and 2018.

The Republicans also questioned whether the DOJ is considering payments to parents or legal guardians whose child was removed because the parent or guardian had a “conviction for an offense relating to sexual abuse of a minor,” and whether the DOJ is considering payments to individuals who chose to leave their child in U.S. custody rather than take their child with them when returning to their home country.

The Judiciary Committee Republicans asked that Garland provide the requested information by Nov. 19th.
The debacle of the Afghan Retreat will stick to President Biden, hitting at his reputational core, and many politicos say he no longer comes across as empathetic, much less serious. by N/A is licensed under N/A