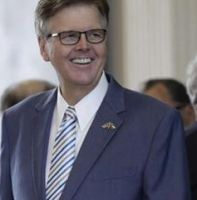 When Kanye says The Democrat Party didnt help me get here I got here with my own hard work thats what the Republican Party stands for creating the opportunity.

AUSTIN Texas (Texas Insider Report) Over many many visits now Ive been able to spend a lot of time with President Trump. And when I grew up dad was a truck-river and mom was a book-keeper and I like most other folks just read about presidents in history books. I certainly didnt ever think Id get the chance to meet one so its a been a privilege and an honor to be able to do so Lt. Gov. Dan Patrick told Insiders Jim Cardle just days after Patrick welcomed the president to Texas for his tour of Apples manufacturing facilities in north Austin.

But I can tell you President Trump really honestly cares about people.

My background before I ran for office was in radio & television and I interviewed a lot of celebrities and politicians over may career when I did that for a living and I would always look at how whomever I was interviewing treated the people working in the studio how they either stopped and took time to visit with the receptionist or the radio engineer or the TV cameraman or whether they just walked right by all those folks and sat down to do the interview.

Some just walked right by and others would stop to visit or introduce themselves they knew people were truly interested in them they knew that people wanted to meet them and shake their hand or maybe get a picture taken and Donald Trump is that guy said Patrick.

Ive done countless events with the president and while were usually going through security or slipping through the back door to get on stage President Trump never just walks by anyone.

He always stops whether these people are black brown or white Republican or Democrat he doesnt know he always stops to shake their hand makes sure they know he views them as being important and that says a lot to me about him said the Lt. Governor.

So when I see all these things written about him written by the hateful-hateful left I know its just untrue.

This is a guy who loves this country and I think what he loves about Texas is that he sees the state as exemplifying whats made America great were really the last vestige of the nation most Americans grew up in and he loves what we stand for" Patrick said.

And thats the best part of this job of being Lt. Governor its having the opportunity to go around the state and visit with everyone from the tiniest little businesses to businesses youve never heard of or big businesses to have the chance to meet these great men and women whore entrepreneurs whove built their businesses or those whove just moved here because theyre the reason we have the #1 economy in the nation.

Government shouldnt tell you how to be successful government should let you do it and give you the opportunity to do it. Thats why all these companies are moving here from other states.

Ten days ago I didnt know either Kaye West or Kim Kardashian West. It all started with the focus thats been brought and letters that have been written to Gov. Abbott about the upcoming execution of Rodney Reed which has now been put on hold and is under review.

She called me to talk about it and after hearing what she had to say I mentioned to her that Im involved with one of the most extraordinary Seminary Prison Projects in America its the largest in the world called the HeartOfTexasFoundation.org. We train inmates inside the walls of prison to be ministers behind bars 24/7 so they can help other prisoners in need.

This program works with prisoners whore serving between 20 years to life and I work on it with Sen. John Whitmire of Houston a Democrat. Its a truly bi-partisan issue.

Since 2011 weve graduated 169 pastor inmates from Southwestern Seminary again whore serving 20 years to life who are then sent out in teams of four to other prisons and theyre now ministering to over 50000 of the inmates in our state said Patrick.

Its been so successful in changing the prison culture here in Texas that now other states like Oregon Arkansas North Carolina and others are following our Texas model and sending seminary prisoners out into the other prisons in their systems.

So I took the opportunity to share with Kim Kardashian West this story and a lot of times when you tell somebody like this about your program they say theyre interested but you never hear back from them. Well she texted me back the next day and said shed looked into it she said she was really interested in it and she asked if Id join her and Kanye Sunday at Joel Osteens Lakewood Church where he was going to be speaking and wed talk more about it and visit.

So theyve become interested in this type of Prison Reform and a lot of people also know that Kayes worn a Make America Great Again hat in to see President Trump in the Oval Office. And because hes said now (quite) publicly that Democrats dont speak for every black person in America and they dont speak for him that took an enormous amount of courage for him to say that said Patrick.

Ive always said Im a Christian first a Conservative second and a Republican third and this whole situation became what many Texans refer to as a God Thing because we started out talking about one issue an execution and ended up talking about the HeartOfTexasFoundation.org prison reform program. And what Kayes doing by speaking out to African-Americans about this higher calling of life-changing of culture-changing is more important than anything else either of us do.

As with any celebrity in sports or music or politics but particularly in the communities that buy his CDs and download his music which is primarily the minority communities he can say something (politically) that will at least get them thinking and talking.

And probably no one else in the black community save for maybe Oprah and shes a strong Democrat has the platform to speak about these issues said the Lt. Governor.

So when Kanye West comes out and says Look the Democrats dont own me because Im black and he shares that message with other black people and says Your Vote is Your Right Your True Freedom that can resonate.

And look the Democrats have done nothing nothing for the Black Community. The Democrat Party has done nothing whether its on education on jobs or economics so when a Kanye West who started with nothing and is extremely wealthy today looked at the opportunities hes been given in this country and says Democrats didnt help me get here I got here with my own hard work thats what the Republican Party stands for creating the opportunity helping others succeed and black white or brown in this country you can do it.

Its a great message said Patrick.