Let the Democrat Freak-Out Begin: Biden Returns from Europe to a National Mood Completely Upended Since He Left 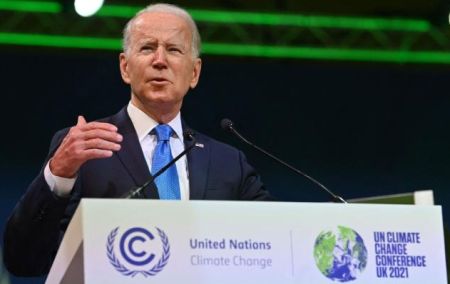 President Biden speaks during the COP26 U.N. Climate Change Summit in Glasgow, Scotland in early November, 2021. by N/A is licensed under N/A

President Biden returns from Europe, is greeted in Washington, D.C. to a changed national mood that's been completely upended since he left

WASHINGTON, D.C. (Texas Insider Report) — Before departing the country six days ago for a series of international climate control and environmental meetings with various world leaders, President Joe Biden told House Democrats, “I don’t think it’s hyperbole to say that the House & Senate majorities – and my presidency – will be determined by what happens in the next week.” Biden embraced the Virginia governor's race as a referendum on his presidency, and aqctively campaigned in the state.

In saying that, Biden meant any further Democrat infighting and continued Congressional inaction on his two "signature" legislative priorities – or leaving Europe with no Congressional backing for his climate proposals and the possible defeats of one or more Democrats in Tuesday's elections – would make everything worse.

Little did Biden know how prescient his comments would prove to be.

As it turns out, President Biden mattered more in Virginia and many of the other elections taking place across the nation yesterday than did Donald Trump – particularly when it came to Republican Glenn Youngkin's Democrat-smashing triumph over Terry McAuliffe.

Bud Biden, not Trump, is the President now, and how voters feel about him is paramount.

Youngkin’s surge begin in August, when Biden’s messy exit from Afghanistan started to drag down his approval ratings and put questions of incompetency in the minds of many Americans. By the fall, Biden had even disappeared from the McAuliffe campaign’s mailers going into swing areas across the state.

According to exit polls, current Presidint Joe Biden is virtually as unpopular today in Virginia as is former President Donald Trump, and Tuesday night served as a warning to Democrats that their anti-Trump strategies may not work as anticipated in elections to come.

If Tuesday's election results – from Virginia to Seattle, in Minneapolis, and from San Antonio to Buffalo, N.Y are any indication, there may be some bigger and more massive voter sentiments sweeping the country for Republicans to tap into, and which Democrats will surely fear as 2022's Mid-Term Elections now move Front & Center.
In Virginia, exit polls also showed that 84% of voters at least "liked" either Biden or Trump. 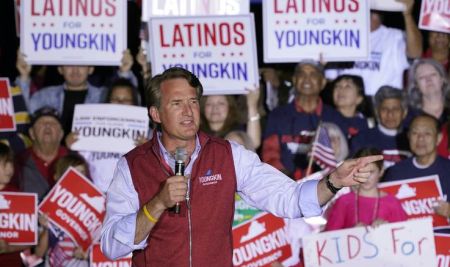 It was the un-opiniated 16% who determined the election. Had these voters broken evenly, McAuliffe could have won the race by a small margin.

The Republican, Youngkin, ran a campaign that was a throwback to pre-Trump Republicanism – and Democrat McAuliff ran a campaign indicative of the party's traditional "Republicans are racists" song. Youngkin's campaign resonated with, or appealed to working-class white voters, and when combined with his down-home conservatism that focused on education, (read McAuliffe's "Critical Race Theory" and "parents shouldn't be involved in their children's classrooms" mis-steps,) as well as his low taxes and government efficiency messages, the two-track strategy worked.

Youngkin's TV ads and rallies moved undecided voters to his side in the homstretch, and even his simplistic comments about having a human answer the phone at the DMV was an effective, big applause line too.
The off-year Virginia gubernatorial election has a nearly perfect record in recent decades of serving as the first "voter backlash" measurement tool to compare against the party in power. But Youngkin’s victory – after Biden’s 10% win in the state a year ago, and when the prevailing wisdom had become that Virginia was no longer a swing state, but a blue state – shows that the backlash is indeed fierce, and growing with speed all across the country.

How will Congressional Democrats like Nancy Pelosi and Chuck Schumer respond to the shellacking?

Tuesday’s results weren’t even official before the Democrat progressives and moderates feud pulled out the long knives.

A congressman from New Jersey, saying he was speaking for the more "moderate" wing of the House Democrat's fractured party, said the results were,
“A F#@king disaster down ballot, and were way too close at the top. Not enough excitement at top of N.J. ticket — Biden, Covid, No accomplishments.”
A top aide to House "progressives" on the McAuliffe defeat added: 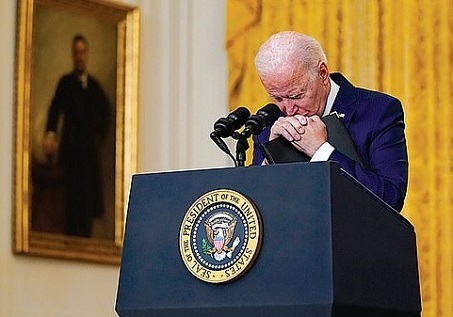 “It’s absurd to blame progressives for Virginia. A.) This was a culture war election, not about federal issues. B.) Terry McAuliffe is a centrist. C.) If you want to fault D.C., fault the tiny group of conservative Dems who intentionally blocked childcare, prescription drug reform, universal pre-k, and paid leave all fall.”

History strongly suggests that the midterm elections quite often deliver a big blow to the incumbent president. But the more immediate danger for Biden is his precarious legislative agenda.

Finally on Tuesday, Biden’s "approval" rating was the lowest of his young presidency, at 42.8%.

President Biden speaks during the COP26 U.N. Climate Change Summit in Glasgow, Scotland in early November, 2021. by N/A is licensed under N/A