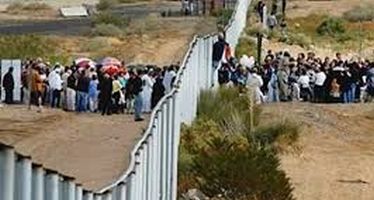 Immigrants pass through a fence hole along the nation's border. by N/A is licensed under N/A
Border Towns Warn Residents: Border Patrol Forced to Release Detained Immigrants Into Communities

AUSTIN, Texas (Texas Insider Report) — In towns along the U.S. Mexico Border in South Texas' Rio Grande Valley, cities have begun alerting their residents that due to U.S.-run holding facilities being overcrowded because of the continued wave of illegal border crossings, U.S. Border Patrol will now be releasing processed illegal immigrants into their town's general population. 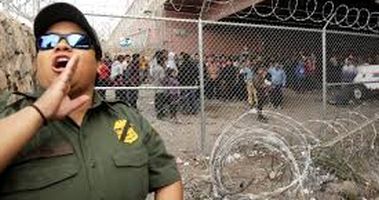 Most, if not all of the small towns and cities have long ago depleted what few precious resources they once had available to help them.

Within its Yuma Sector alone, U.S Border Patrol is holding over 3,000 people in their facility – which is well over capacity – as well as approximately 1,000 additional illegal immigrants who are waiting along different parts of the U.S. Border to be picked up by Law Enforcement.

The situation has once again resulted in illegal immigrants walking into Carrizo Springs's city limits in attempt to find Border Patrol Agents in order to be processed.

The City of Carrizo Springs, Texas – with a 2020 Census Population of 4,892 people, down from 5,368 in 2010 – posted on its official city website that Border Patrol has begun releasing illegal border crossers into their town after being "processed" at the Federal Facility.

And, local Congressman Tony Gonzales (below right) – whose 23rd Congressional District runs along the Texas-Mexico Border and includes the single largest portion of the Southern Border within any one Congressional District – also revealed in a Tuesday tweet that the City of Uvalde confirmed to him Border Patrol would be releasing additional illegal crossers from the holding facilities due to overcrowding. Tweeted Gonzales:

"Today Uvalde officials alerted me that migrant facilities in the area are overcapacity and Border Patrol will be forced to release them at Stripes (convenience store.)

"Local authorities & Border Patrol have been completely handcuffed by the (Biden) Admin.

The official City of Carrizo Springs website alerted the city's residents to the federal government's pending releases by saying:

"Public Notice: A meeting was held today, Tuesday, March 22, 2022, regarding the release of undocumented migrants. Border Patrol will be releasing these individuals after processing them in their facilities here in Carrizo Springs community. Present at the meeting (were the):
"These (undocumented migrant) individuals have been processed with a background and criminal check, the normal process was to be transported back to the Eagle Pass area, but due to that facility having no vacancy due to the high volume of migrants, the federal government has instructed the local border patrol to start releasing these individuals here in Carrizo Springs. Typically, the release would happen in Eagle Pass.

"After being processed here in Carrizo Springs the migrant is issued a document that states he or she has gone through the processing stage and will provide proof to any law enforcement official.

"Uvalde is another city away from the border that will be going through the same release of migrants as Carrizo Springs. That city has gone through the process and release in prior years.

"Due to Carrizo Springs not having a bus depot or public transportation that these migrants use for possible transportation such as in Del Rio and Eagle Pass, the City of Carrizo Springs and Dimmit County will contact Uvalde on how that city dealt with the release of these individuals."
Immigrants pass through a fence hole along the nation's border. by N/A is licensed under N/A