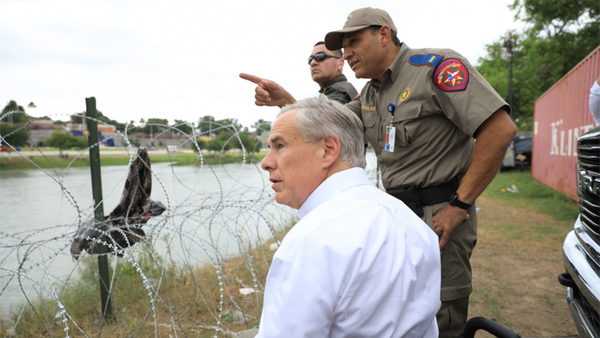 During the press conference, Governor Abbott provided an update on Texas' border security strategies along the Rio Grande.

In effort to thwart cartel activity along the Texas-Mexico border, Abbott noted that the State of Texas continues surging resources — including razor wire — to border communities to build stronger, more efficient barriers to deter illegal crossings between ports of entry. He also discussed Texas’ continued efforts working collaboratively alongside law enforcement partners in Mexico and the governors of the Mexican States of Chihuahua, Coahuila, Nuevo León, and Tamaulipas, who signed historic border security memorandums of understanding with Texas last month.

Governor Abbott also detailed the State of Texas' ongoing support for local border communities as they mitigate the mass influx of illegal immigrants, deadly drugs, and weapons across the Rio Grande, including continuing to bus migrants from Texas to Washington, D.C. As of today, the Governor announced that a total of 45 buses have left for Washington, D.C.
"Texas communities are bearing the burden of the Biden Administration's open border policies, and the State of Texas will not allow the inaction of the federal government to impede on the safety and security Texans deserve," said Governor Abbott.

"The Lone Star State will not waiver in our efforts to secure the border, and we will continue to do deploy all resources necessary to prevent the flow of deadly drugs like fentanyl, human smugglers, dangerous criminals, and other illegal contraband from coming into Texas.

"Operation Lone Star continues to fill in the gaps where the federal government has failed Texans, and I thank local law enforcement, the Texas Department of Public Safety, and the Texas National Guard for their continued collaboration in taking unprecedented measures to secure the border."
Governor Abbott has taken significant action to secure the border in the wake of the federal government’s inaction. Those actions include:
Read more on additional actions taken by the Governor to secure the border through Operation Lone Star.
Governor Greg Abbott toured the Texas-Mexico Border Texas with National Guard and Texas Department of Public Safety by N/A is licensed under N/A