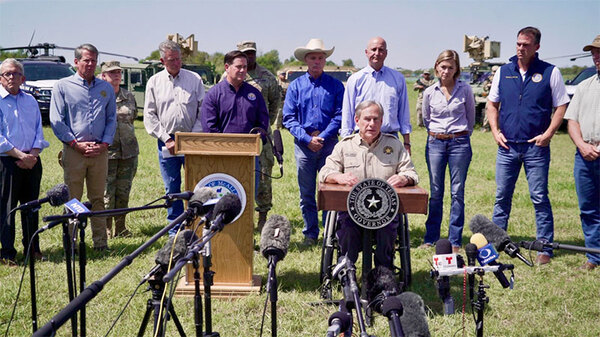 Greg Abbott held a press conference with nine other state governors in Mission, Texas by N/A is licensed under N/A

"The Biden Administration's open border policies have led to complete chaos at the southern border, and pose a threat to the safety of Texans and all Americans."
– Governor Greg Abbott

Texas Insider Report: AUSTIN, Texas – Governor Greg Abbott yesterday held a press conference with nine other state governors in Mission, Texas to discuss the ongoing crisis at the border as well as what Texas is doing to keep communities safe in the midst of President Joe Biden's disastrous open border policies. During the press conference, Governor Abbott and the other governors discussed the far-reaching impact of the Biden administration's open border policies, particularly with the rise in fentanyl in communities across the nation. The governors also outlined a 10-point plan that President Biden can take to end the crisis.

During his remarks, Governor Abbott recognized Arizona Governor Doug Ducey for his partnership and thanked the other governors in attendance for their shared commitment to securing the border and keeping Americans safe. Governor Abbott also reiterated his commitment to surging resources in Texas' fight to secure the border, including Operation Lone Star and his own 10-point plan of actions Texas has taken to secure the border:

Prior to the press conference, Governor Abbott and Texas Department of Public Safety (DPS) Executive Director Steve McCraw hosted the state governors for a briefing on what Texas is doing to secure the border.

Governor Abbott was joined at the press conference by:

"The Biden Administration's open border policies have led to complete chaos at the southern border, and pose a threat to the safety of Texans and all Americans," said Abbott.

"Texas has stepped up to keep our communities safe and mitigate this crisis ourselves, and our efforts have been made stronger by the support and assistance of governors from across the nation. I thank the state governors who are here with me today for their support and for visiting the border to see firsthand the ramifications of President Biden's disastrous policies.

"Together, we are sending a strong message to the Biden Administration that we will not tolerate their refusal to secure the border — and we will continue to do whatever it takes to keep our communities safe."
"We’re not going to sit around while Biden refuses to act," said Governor Ducey. "We’ve tried to meet with the president and be part of the solution, but he refuses. No, worse — he ignores us, just like he’s ignoring the border and the well-being of the American people. If the president won’t meet with us, then we’ll share our policy ideas today. Hopefully he will hear our solutions and begin to act."
"When we see this type of mass influx of migrants to our state, the cartels profit by exploiting the situation," said DPS Director Steve McCraw.

"Unless we act, there is no stopping them from reaching communities across the country with their drugs and violence. Governor Abbott has made it very clear, Texas is going to lean forward and take a stand. We are grateful for his leadership and the continued support of our partners, both here in our state and across the country, in making sure we secure our southern border."

In June 2021, the State of Texas and the State of Arizona invoked the Emergency Management Assistance Compact. Under this interstate compact, Governor Abbott and Governor Ducey asked other states to send law enforcement officials and equipment to help mitigate the ongoing border crisis.

Greg Abbott held a press conference with nine other state governors in Mission, Texas by N/A is licensed under N/A