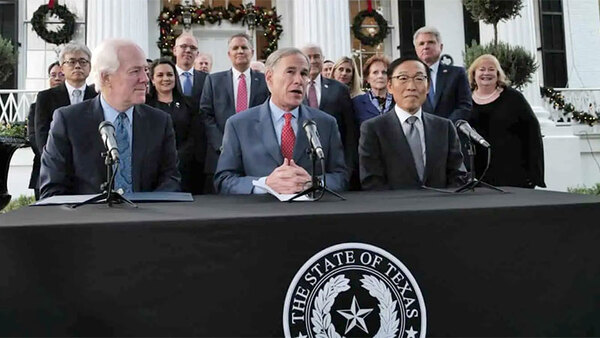 Governor Abbott Announcest $17B facility coming to Taylor, Texas by N/A is licensed under N/A

"Samsung’s approximated $17 billion investment will be the largest foreign direct investment in Texas on record, bringing the company’s total Texas investment to more than $35 billion since 1996."
– Governor Greg Abbott

The project will create over 2,000 high-tech jobs, thousands of indirect jobs, and a minimum of 6,500 construction jobs. Construction will begin in early 2022 with a target of production start in the second half of 2024. The $17 billion in capital investments includes buildings, property improvements, machinery, and equipment.

A Texas Enterprise Fund (TEF) grant of $27,000,000 has been extended to Samsung for their job creation. In addition, Samsung has been offered a $20,000 Veteran Created Job Bonus.
"Companies like Samsung continue to invest in Texas because of our world-class business climate and exceptional workforce," said Governor Abbott.

"Samsung's new semiconductor manufacturing facility in Taylor will bring countless opportunities for hardworking Central Texans and their families, and will play a major role in our state's continued exceptionalism in the semiconductor industry. I look forward to expanding our partnership to keep the Lone Star State a leader in advanced technology and a dynamic economic powerhouse."

"As we add a new facility in Taylor, Samsung is laying the groundwork for another important chapter in our future," said Dr. Kinam Kim, Vice Chairman & CEO of Samsung Electronics Device Solutions Division.

With greater manufacturing capacity, we will be able to better serve the needs of our customers and contribute to the stability of the global semiconductor supply chain. We are also proud to be bringing more jobs and supporting the training and talent development for local communities, as Samsung celebrates 25 years of semiconductor manufacturing in the United States."

"Samsung’s decision to locate its cutting-edge semiconductor fabrication plant in Taylor is the single most significant and consequential development for the local economy since the International & Great Northern Railroad laid tracks here in the 1870’s," said Taylor Mayor Brandt Rydell.

"The City of Taylor is honored to have been selected by Samsung as the site for this critically important project, and we look forward to a long-lasting and mutually-beneficial relationship between our community and the company."

"To Samsung, I want to say 'Welcome Home.' We want to thank Governor Abbott for his amazing leadership and help on this project. With the addition of Samsung on the east side of our county, Apple on the west side, and Dell Computers World headquarters in the center, Williamson County is now home to the technology superhighway of the world."

"As one of the largest foreign investment economic development projects in United States history, to say Samsung’s commitment to this project is monumental would be a huge understatement," said Taylor Economic Development Corporation President and CEO Mark Thomas.

"The Taylor Economic Development Corporation with its partners at Williamson County, the City of Taylor and the Office of the Governor are beaming with pride to bring this important Advanced Chip Manufacturing facility to the City of Taylor, Williamson County, the Austin MSA, State of Texas and the United States of America."
View more information about Samsung Austin Semiconductor, LLC.
Governor Abbott Announcest $17B facility coming to Taylor, Texas by N/A is licensed under N/A