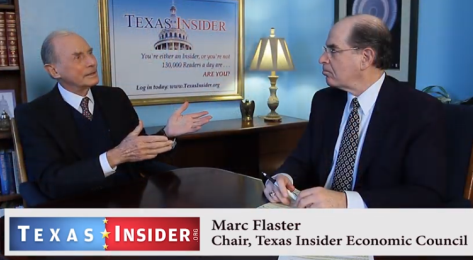 Theres so much supply on the worldwide market right now they cant make a return on what theyre spending.

AUSTIN Texas (Texas Insider Report)  Here in the United States or out in West Texas weve already seen a number of Oil & Gas Producers announce theyre shutting down or filing for bankruptcy because they just cant make a return on what theyre spending" said Texas Insiders Economic Council Chair Marc Flaster. They cant continue to explore anymore given the fact that theres so much supply on the worldwide market right now Flaster tells Jim Cardle.

The newspapers may be chock-full of government collected jobs figures & employment data but people are working and earning a living these days in a manner thats outside the limits of the typical bean-counters" said Flaster.

Theyre not necessarily employed by large companies or by a company that has to file a payroll report with the state or federal labor counters like they used to.

So you have what we all see as the reported level of jobs and employment in the nation but that doesnt mean the economy isnt supporting and employing a whole lot more people.

And a lot of them are earning money at very high levels.