63% of Democrats are at least a little worn out by the pandemic-related changes to their lives, and 34% feel angry about it

WASHINGTON, D.C. (Texas Insider Report) — A majority of Americans say they feel “worn out” by how Covid has impacted their daily lives, and nearly half feel “angry” about it according to the latest Monmouth University Poll. And support for face mask and workplace vaccine mandates has also declined since the fall when the delta variant started to dominate.

Support for requiring people to show proof of vaccination in order to work in an office – or any other setting where they are around people – has gone from a slight majority of 53% in September, to a minority of 46% now in December. 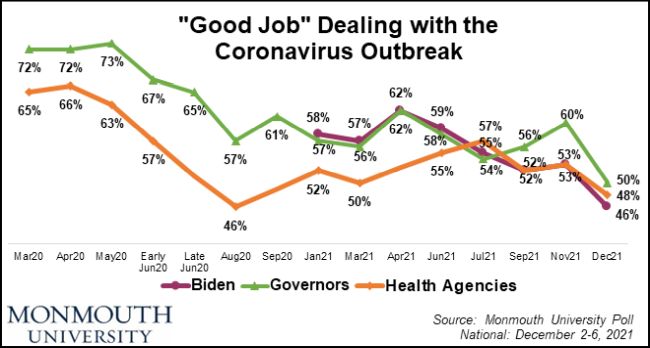 Also, the public’s exasperation may also be having an impact on how they view their political leaders’ handling of the pandemic, according to the latest Monmouth University Poll.
The poll also finds that nearly half of the public feels angry about how Covid has impacted their daily lives – 24% a lot, and 21% a little.
Looking at both feelings simultaneously regarding how Americans view Covid-driven changes to their daily lives:
Of the adults that say they feel either or both of these negative emotions, the age breakdown is:
“The fact that Americans say they have had enough should be no surprise. Every time we try to adjust to a new normal, another variant pops up to put us on guard again. This perpetual unease is having an impact on how we view those charged with handling the pandemic,” said Patrick Murray, director of the independent Monmouth University Polling Institute.

Has President Joe Biden done a "Good Job" or a "Bad Job" Handling the Pandemic?

The American public is now split evenly – 46% to 46% – on whether President Joe Biden has done a good job or bad job handling the pandemic.

Prior to this poll, Biden’s ratings on the pandemic had consistently been in net positive territory – including as recently as last month when the difference was 53% good and 41% bad.

Positive ratings for how Biden is handling the pandemic has dropped more among independents (from 50% in November to 38% now) than it has among either Republicans (from 16% to 10%) or Democrats (from 90% to 88%).

Perhaps most noteworthy is that: 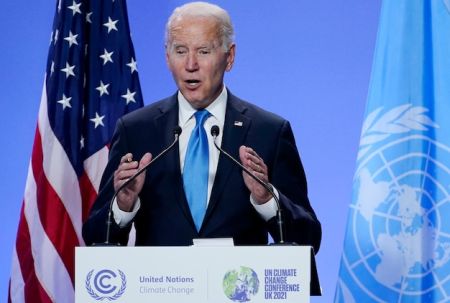 “We just came out of an off-year election in Virginia and New Jersey where blue states did not look so blue. The failure to get Covid under control may be playing a role there, especially for independent voters, in a growing sense of frustration with the party in power,” said Murray.

The number of people who are very concerned about a family member becoming seriously ill from the virus (30%) is the same as it was in July (30%), when cases were at a low ebb. This level of concern rose to 45% in September as the delta variant spread. Just under half are concerned – 14% very and 32% somewhat – about them personally catching one of the new Covid variants.

These results are similar to the July poll (the question was not asked in September). Concern about catching a new variant is somewhat higher among those who have already received a booster shot (66%) than among those who are vaccinated without a booster (51%) – with the caveat that the booster cohort is older than the non-booster vaccine group. However, both of these vaccinated groups are much more concerned about infection from a new variant than those who have not been vaccinated at all (12%).

The Monmouth University Poll was conducted by telephone from December 2nd to 6th, 2021 with 808 adults in the United States. This includes 285 contacted by a live interviewer on a landline telephone, and 523 contacted by a live interviewer on a cell phone, in English. Telephone numbers were selected through a mix of random digit dialing and list-based sampling. The full sample is weighted for region, age, education, gender and race based on U.S. Census information (ACS 2018 one-year survey). The question results have a margin of error of +/- 3.5%.

Self-Reported DEMOGRAPHICS (weighted) were:
Crosstabs may be found in the PDF file on the report's webpage: https://www.monmouth.edu/polling-institute/reports/monmouthpoll_US_121521