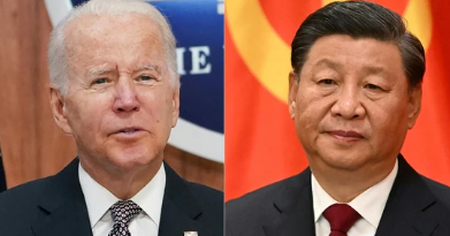 President Biden says he underscored that the U.S. & China must work together to address transnational challenges such as climate change during their Nov. 14, 2022 meeting. by N/A is licensed under N/A

AUSTIN, Texas (Texas Insider Report) — This is the story of China’s 100-year plan for world domination.  To do that, they must defeat the United States of America.  One of the quotes from this new film literally jumped out at me when I saw the trailer:

“In front of the United States is a tiger who wants to eat you.”

That’s scary.  But it brings up a number of important questions.
The Mainstream Media in the United States is certainly aware of the China threat, but does little reporting on it.  It doesn’t pop up as much on social media as does, say, funny cat videos.  And, of course, when a major threat to (as the Democrats like to say over and over) Our Democracy is real, it’s hard to be concerned if you never hear much about it.

The Epoch Times has fought a relentless battle to get this story out.

If you’ve never heard of The Epoch Times, and have never read it, you may not realize how seriously in trouble the world could soon be.  As a political junkie, writer, and talk show host, I’ve always been aware of the threat from the country that gave us COVID-19.

But when I began doing freelance writing for them in the midst of the China Virus, I learned more than I ever knew before.  Enough to scare the pants off any rational person.  What’s more, The Epoch Times should know since their founder and so many of their people escaped from China.  In fact, the CCP is likely to blame for many attacks against the newspaper’s printing presses in Hong Kong.

So when The Epoch Times announced its new documentary film, THE FINAL WAR, I took note.

You might classify it as a horror film.  But it’s not in the mold of the typical Hollywood epic, because those are fiction.  This is real.
THE FINAL WAR examines that stragey and ought to be a major reference point for any U.S. politician that wants to fully understand the threat we face.  Trust me, the world is in far more danger fro the Chinese Communist regime than it will ever be from climate change – and yet the MSM harps on the minor threat while essentially ignoring the elephant in the room.

This movie will not show at your local theater.  Here’s how you can see it.

THE FINAL WAR will be shown to an exclusive group of thought leaders and interested people from the general public.  There is no cost to attend.  All you have to do is send in your RSVP.

You can bring friends and family so long as seating is available.

Here is what you need to know:
The panel will consist of:
THE FINAL WAR is a must-see film. This is the story of the real threat to America.

If you can’t attend this special screening, watch for it online and read The Epoch Times to find out how to access it.

This is a battle we must be prepared for.  The first step is to know to the facts.

Lynn Woolley is a Texas-based author, broadcaster, and songwriter who can be heard every weekday morning from 7-9am on Austin, Texas' Cardle & Woolley Radio Show. Order books direct from Lynn at https://PlanetLogicPress.Square.Site, or Email him at lwoolley9189@gmail.com.

President Biden says he underscored that the U.S. & China must work together to address transnational challenges such as climate change during their Nov. 14, 2022 meeting. by N/A is licensed under N/A