Biden is Now Underwater, Drowning in 48 of 50 States – Including His Home State of Delaware says Civiqs Poll

WASHINGTON, D.C. (Texas Insider Report) — “Do you 'approve' or 'disapprove' of the way Joe Biden is handling his job as president?” That was, is, and will be the question that The Civiqs Polling Firm is constantly asking in its unique way – on a rolling basis, surveying 1,000s of respondents in all 50 States – before aggregating, organizing and tabulating the data to produce both National & State-by-State numbers that since March 2nd, 2021 have been deteriorating for Biden. 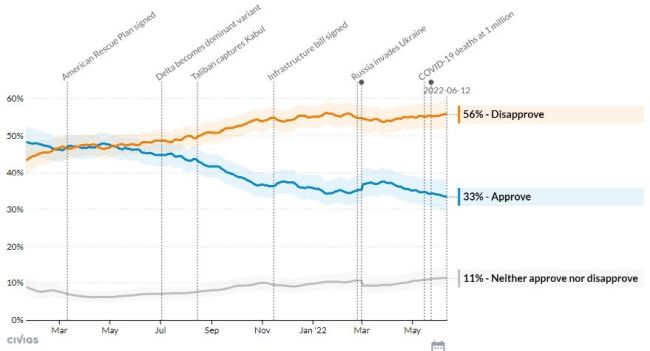 And on Sunday, June 5th, yet another new low was hit for Joe Biden's "approval" in the Civiqs Poll... just 33% "approval" vs. 56% "disapproval," where the rate still sits today.

Most polling firms sample as few 1,000 people or less in order to gather enough information to release their findings with some degree of statistical cartainty that correspond to the feelings or beliefs of the state, Congressional District or community being surveyed – but Civiqs has a respondent database of over 200,000 survey takers, and their numbers date back to January of 2021.

In short, these numbers represent a very wide lens into how voters across the country feel about Biden’s presidency – and the answer for most of his time in the White House has been quite dour.

Just two states, Vermont & Hawaii, currently give Biden a positive "approval" rating. The rest – including such left-wing bastions as New York, California, Maryland and Massachusetts – all give him negative numbers when it comes to presidential job approval according to the latest numbers from Civiqs.

There’s no more “controlling” inflation for Biden. And inflation is certainly not "transitory" in nature as he and his administration officials initially touted. That horse is out of the barn.

Gas Prices arre continuing to escalate – and have yet to work their way into the prices of the rest of the nation's goods and services, which portend quite a painful remainder of 2022, and according to a growing number of economists, a recession in 2023.

The time for steady, wise leadership was way back at the beginning of last year – before Democrats in Congress passed legislation or the Biden White House had implemented its economy-strangling regulations that have now even led to Baby Formula shortages.

It’s hard to imagine – and they'd never admit it – but many Progressives-Socialist Democrats-&-Regular-Old-Liberals said during Donald Trump's presidency that they’d rather fight and go down with the ship than give up and allow "Orange Man Bad" to win. That same level of committment carried over once Joe Biden ascended to the presidency, and has since become Democrat's modus operandi.

Even as the nation and their Democrat Party burns down around them.

Now, with no reasonable way to back down from their policies that have:
The Civiq numbers, as well as their unique and sophisticated method of conducting and tracking Voter's Sentiments, are nothing but indicative of the situation Democrats face.

Joe Biden’s & the Democrat Party's 2022 Congressional prospects are, quite literally, already baked into the cake – but with The Squad's AOC & CNN'S Don Lemon even questioning Biden's 2024 viability in public during the past week, things are only going to get substantially worse for Democrats.

And fast.
​​​​​​
The escalating economic crisis the Democrats have created is going to be painful beyond belief – for them, and millions of Americans as well.