Bernie Sanders Slams Elizabeth Warren: Shes a capitalist through her bones. I am not. 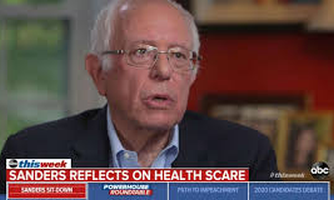 I am the only candidate whos going to say to the ruling class the corporate elite Enough with your greed and your corruption."

WASHINGTON D.C. (Texas Insider Report) Elizabeth (Warren) as I think you know has said she is a capitalist through her bones. I am not" said the self-described Democrat-Socialist and Democrat presidential candidate Bernie Sanders over the weekend in an interview with ABCs This Week".

Said Sanders Elizabeths been a friend of mine for some 25 years and I think she is a very very good senator. But there are differences between Elizabeth and myself.

I am I believe the only candidate whos going to say to the ruling class of this country the corporate elite Enough. Enough with your greed and your corruption."

We need real change in this country" said Sanders.

Sanders made the comment in a response to a question about the similarity between his positions and Warrens. Each is seeking the Democrat nomination to face President Donald Trump in the 2020 Election.

What points our Sanders is the difference between himself and Sen. Warren? Warren has previously described herself as a capitalist to my bones."

According to reports at the time Warren made her bones" comment while speaking to members of a New England business group in July of 2018.

And Sanders who just recently had two stents placed in his heart while being treated for a heart attack now says he believes more change than just additional regulations are needed to address the greed and corruption" in WashingtonD.C. and among the nations corporate leaders.

Upon being released from the hospital after his heart attack Sanders appears to have adopted a no-holds barred approach to his 2020 presidential campaign.

The Vermont Democratic Socialist slammed his rival presidential competitor and fellow Senator Elizabeth Warren who according to many polls is now the Democrat front-runner for being too much of a capitalist criticizing an U.S. elected official for (somewhat) believing in the greatest economic system in history.

At least on of their fellow Senators Georgia Senator David Perdue have expressed shock and dismay that America has now reached a point where a self-avowed anti-capitalist could be a serious contender for the U.S. presidency.

David Perdue✔ @Perduesenate - I never thought wed have to build a case about why capitalism is better than socialism.

I never thought wed see a time where attacking your political opponents by calling them capitalists was mainstream in one political party.

But here we are tweeted Perdue (R-GA.)

And should Sen. Sanders not listen to Sen. Perdue Sen. Rand Paul (R-KY) has a new book out addressing the scourge of socialism sweeping through the nations Democrat party.

Paul sat down with Tucker Carlson Tonight recently to discuss his new book.

Some of it is theyve forgotten their history Sen. Paul explained about the crop of 2020 Democrats.

They seem to have forgotten that said Sen. Paul noting that many are confusing the Scandinavian economy with socialism which he dispels.

We spent a lot of the book describing the fact that Scandinavia is not socialist. But we also report that you know what Bernie is actually too much of a socialist to even get elected in Denmark.

The prime minister of Denmark has said

Bernie quit calling us socialist we are not socialist We are open for business and you are ruining our business by telling the world we are socialist and we are not.

Senator Sanders comments show a marked shift in his campaign rhetoric and seem to indicate voters might see some fireworks at Tuesday nights CNN debate.