ABBOTT: Texas Now 'Laying Miles Upon Miles of Razor Wire' to Blockade Border Ahead of Yet Another 'Caravan' 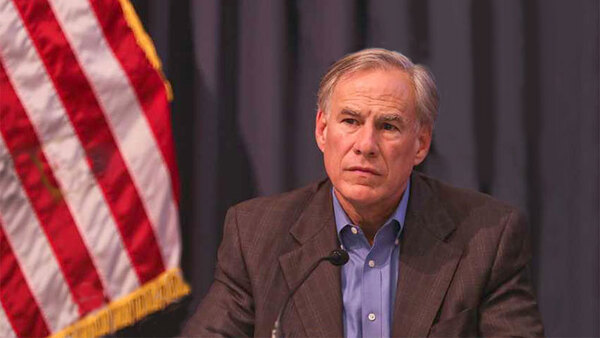 Texas deploys "1,000s upon 1,000s" of National Guard Troops & Dept. of Public Safety Officers who are currently "barricading the border"

AUSTIN, Texas (Texas Insider Report) — "Those are Texas taxpayer dollars doing the Federal Government's job," said Texas Gov. Greg Abbott, adding that Law Enforcement Officers now on the Texas-Mexico Border were laying down "miles of razor wire" to tighten border security amid media reports of an approaching caravan of migrants. "But listen, we have to do it. We have to step up. We have to secure our border while the federal government twiddles its thumbs."

Approximately 1.7 million illegal immigrant apprehensions were carried out by U.S. Customs & Border Patrol on the Southwest Border over the past 12 months – the highest number ever recorded, breaking a previous high of 1.6 million, which had stood since 2000. These figures include:
Abbott also said Texas is "building its own border wall," and that work will begin on that in the next two months following the Texas Legislature's recent appropriation of more than $3 billion of state taxes to secure its border.

The state is also using huge shipping containers to block the border, and is identifying the most likely locations where people may be trying to enter the state and doing all that can be done to secure those areas, said Abbott.

"In addition, Texas is building its own border wall, and we expect to have some of that wall up as early as within the next two months," the governor continued.

"We also have a new program in place where people who come into the state and are trespassing in our state, we are arresting them and putting them in jail as opposed to Biden's catch and release program.

Still, President Biden and Vice President Kamala Harris – as well as departments within their administration – are "working against the state of Texas' efforts to secure our border and to keep our own state safe," Abbott said.

"It's been unbelievable," he said. "First they've abandoned the border... and they're not enforcing the law."

Former president Donald Trump made building a wall across the entire U.S.-Mexico border one of his main presidential campaign promises, although it was never completed due to liberal organizations and Democrat's push-back causing delays that lasted years in length.

On his first day in office, Joe Biden signed an Executive Order that paused wall construction, saying that building a "massive wall that spans the entire southern border is not a serious policy solution" and also a "waste of money."
Biden also scrapped a number of Trump's immigration policies in favor of what he referred to as more humane processes.

Since Biden's being sworn into office, record breaking numbers of people have been detained at the U.S.-Mexico Border – and polls consistantly suggest voters do not have confidence in his ability to handle the issue well.

According to U.S. Customs & Border Protection, there have been more than 1.7 million migrant apprehensions at the southern border over the past 12 months – the highest number ever recorded and breaking a previous high of 1.6 million, which had stood since 2000.
With Texas feeling the brunt of the illegal immigrants influx, Governor Abbott sent a letter to President Biden in March of this year demanding answers to the "humanitarian crisis at the southern border."

"Recent decisions by your administration are emboldening dangerous cartels, smugglers, and human traffickers to ramp up their criminal operations," Abbott wrote. 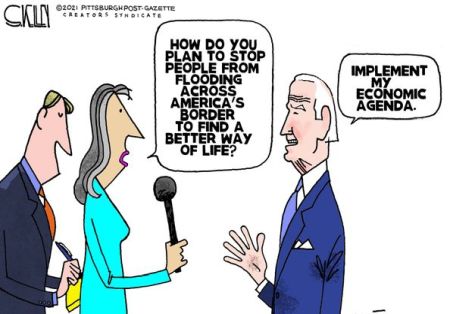 "In many cases, these criminals entice unaccompanied minors into inhumane conditions and expose them to abuse and terror."

A caravan of 3,000 to 4,000 migrants and growing from Haiti, Central and South America recently left Tapachula, Mexico, headed toward Mexico City, with most members planning to continue on toward the U.S.-Mexican border, according to the website Border Report.

This recent caravan serves as part of a larger flow of migrants seen during the 2021 financial year.